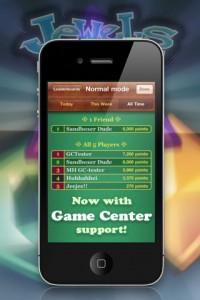 iJewels update version 1.2 was approved today, and the main things on the plate are Game Center support and a brand new game mode: Quick play. In Quick game you have 75 seconds to earn as much points as possible. The new Quick mode will be also available on the Android-Jewels eventually.

Game Center is of course the new social gaming platform from Apple, and is used for the Global High Scores / Leaderboards in iJewels, along with the existing Scoreloop integration. The scores will be submitted to both services, if GC support is activated.

Also in the update are the usual fixes and improvements, so go ahead and grab it while it's hot — if you're on iOS that is.

iJewels on the App Store

iJewels v1.0 has been approved and is now available on the App Store! Yay!

'Nuff said, really, try it if you have an iPhone, iPod touch or iPad! Drop me a review on iTunes if you like the game and/or have something to request for future versions.

If you've visited before, you notice that I've completely changed the website theme. The previous theme was completely my own creation and I grew bored of it quicky, so something had to be done..

After a lot of searching I found a couple of interesting themes. Eventually I selected this nice theme called iNove, and this is what you see, with a few tweaks here and there (mostly fonts and the Home-button graphic). I hope you enjoy the new theme, personally I think it is very refreshing — and as a plus the site also works a bit better than it used to from mobile devices.

Finally: I have finished the first version of Jewels for iPhone a.k.a iJewels and submitted it to the App Store for review today. Now I'm eagerly waiting on results, hopefully the game will be accepted first time through. Exciting times!

The game will be free with ads and with the option of removing ads through an In-App-Purchase.

Naturally I will be announcing right here when the game finally gets to the App Store. Stay tuned!

PS. If you're wondering what's with the "iJewels" name: the reason is that there was already an app called "JEWELS" at the App Store. I had to pick another name so I went with "iJewels."

"Jewels for iPhone" etc. would not probably have been sufficient.

Do you have a brand new iPhone 4? I'm looking for a couple of people to help testing Jewels for iPhone on the actual iPhone 4 device. I have been working on to make sure that Jewels works also in the iPhone 4 resolution (and yes, I have crisp, pixel perfect high resolution graphics included, as well!

) and while I can test in the simulator just fine, I'm interested in how the game performs on the real device. I think it should run about 50-60 fps (hopefully the max), but it is possible that the high res graphics bring it down, which means more optimizing work for myself..

Unfortunately, I think the testers will need to be in the iPhone Developer Program to be able to install the game on their devices. (Correct me if I'm wrong!) But it doesn't hurt to ask, right? So, any iPhone devs willing to test it for me? Drop me a comment if you're interested. If not, I could try to find people on some dev forums. I do have my own iPhone 4 ordered as well, but I'm unsure if I get it before the game is finished..

UPDATE: I did get my own phone, so there is no need for this anymore.

It worked quite well, I had to optimize text rendering though. Now it works pretty much 60 fps all the time. The optimizations also benefit older devices (except 3GS, which was running at 60 fps already) so it was time well spent.