Just a quick status update: school is now over (apart from one exam), the application project course that lasted for four months is also finished. I'm glad that it's done.

My sekrit projekt(tm) is proceeding, albeit quite slowly. Today I have coded it a lot, though. It's still too early to be shown – not that there is anything interesting to show in any case.. Not yet. But fear not: I'll write about it once it is developed a bit more. ^^

Change of plans: I don't think I'll do the CSSTint-rewrite this time.. I've got a much more interesting idea. While it's still too early to talk about this, it involves Qt 4.4 (yay!) and OpenGL. I will write more about it when (or if) I have something to show.

Right now I'm wondering whether to go with SourceForge like I always have, or to use Google Code. Google Code seems nice and simple, as I'll only need SVN and some pages (or a wiki). And yes, it'll be open source.

Just wanted to mention that version 1.0 of Jewels is finally released. I'm glad it's out of my hands now, phew! 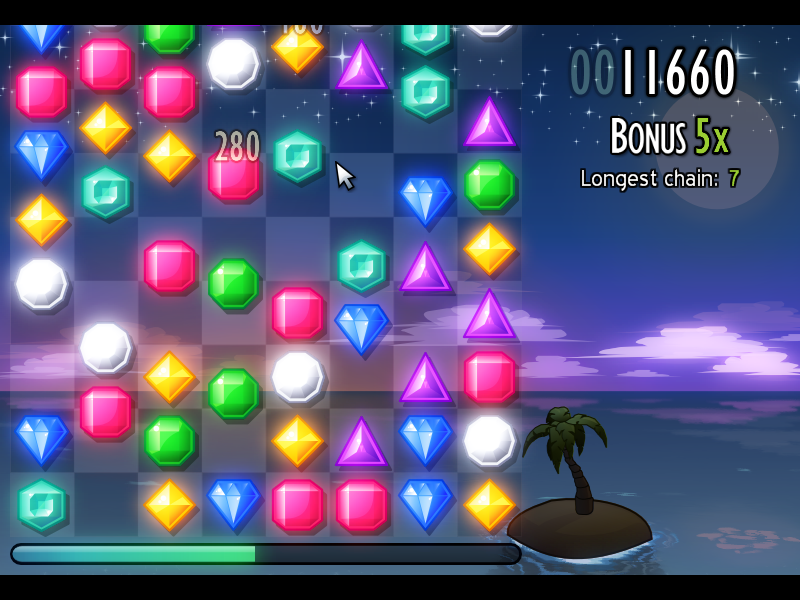 Having been working with Java Swing (*cough*h o r r i b l e*cough*) these last four months, Qt 4.4 brings some light to the end of the tunnel..

Now that that's out of the table, I can talk a little about a project I'm perhaps going to do next summer. It's about remaking CSSTint. While I think the current Windows version of CSSTint is quite nice, it's still… well, Windows-only. While I am using wxWidgets, it's still doesn't work in Linux properly – I have tried. I'm doing some nasty, ugly hacks in the code, so no wonder. All this could probably be fixed, but for the sake of learning and for an interesting experience, I've been thinking of rewriting the whole shebang.

I'm sure I will use Qt for the job, but I'm still undecided between C++ and Python. Learning Python has been interesting for me, as I've blogged before. Python version would also work on Windows as is, which won't hurt even if the original is also for Windows. On the other hand I could reuse some of my non-GUI CSSTint code if I went with C++.. Decisions, decisions…

Why my stuff is Open Source?

I have several reasons why most of my games and programs are Open Source. Here are some of them.

Let's consider an example. Why is Formido available for Windows, Linux, MacOS X, BeOS, Xbox, AmigaOS and even OS/2..? The answer is obvious. Should I have kept it closed source, it'd be for Windows only, and maybe Linux.

Here's another example. Recently I was contacted regarding a bug in Funguloids that prevented it from working with Ogre versions 1.4.6 and newer. I had no idea of this bug, as I haven't personally touched the game since its last release, which uses Ogre 1.4.1. Things have been happening on the community front however, as Funguloids has found its way into Ubuntu Hardy (for which I'm very grateful!

) After exchanging a few e-mails, the person who reported the bug presented me a patch (an one-liner, even) that fixes the problem. I didn't even get started examining the issue myself! Very nice.

Also, as I have learned a lot by reading source code, I feel kind of obliged to do the same.. I'm not worried about people stealing my code – the code's not that good to begin with.