Exactly one week after the Android-release, Jewels 2 is now available from the App Store as well! Get it now while it's hot!

Tip: On some older, fill-rate limited devices such as iPhone 4 and the original iPad, you might want to go to Jewels 2 Settings -> Advanced Settings and tick the reduced resolution box, then exit and restart the game. Also turning of the "Water Effects" helps if the game feels sluggish.

Another tip: If you happen to have several devices such as a phone and a tablet, do check out the awesome game data sync feature in Jewels 2, and have your game profiles and saved games synchronized across multiple devices! Just sign in with Google+ (from the main menu) and you're good to go — it's especially cool since it works across platforms: start a game on your Android-phone and resume it on your iPad, for example.

Jewels 2 is out for Android, right now! Will be interesting to see how it starts going on it's own, out there in the wild.

'Tis but a small game, but still one I've been working on for almost two years (not full time, though), so it feels nice to have it finally out there.

Of course, the iOS version is still missing, but fear not, it has been submitted for review and I hope it will make it in a week or two.

So go ahead and try the game if you're rocking an Android device, it's free. Be sure to let me know if there is any problems.

I want to close with post with this amusing infographic I made this morning. Just for fun, I (roughly) counted the lines of code in Jewels 2 (don't worry I have a tool for that, didn't delay the release by manually counting each line

), all about 90k of them, and assigned them into game-specific code or engine code. The results are… well, let's just say I might be using something like Unity for my next game. 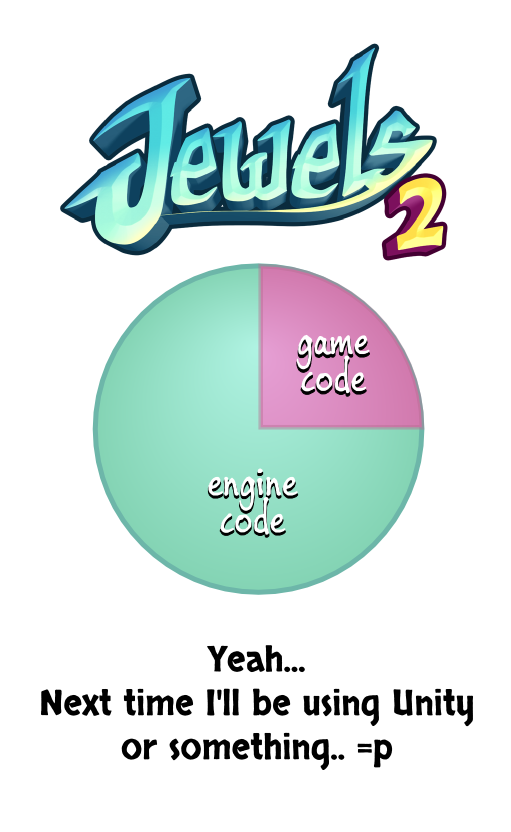 The release draws near…

Got some cool news for you: it looks like I might make it for a May 31st release with Jewels 2! (Android only, iOS will be coming later.) That's like, this Friday, right? Pretty cool if you ask me.

As the Jewels players on Android have suffered with the worse Jewels-version (compared to iJewels on iOS) for years, I want to reward them for putting up with the original all these years. This means that I will be launching on Android first, followed by iOS as soon as I get approved.

Little disclaimer: this information is not 100% sure yet, but I'm maybe like 95% confident that I can release this Friday.

Follow me on Twitter and be among the first to know when the game is live! Naturally I will be also updating this blog when the time is ripe, but Twitter is quicker. 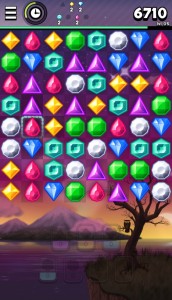 UPDATE on May 20th: So Google I/O 2013 happened. They announced — finally — a gaming service called Google Play Games. This is pretty much what I was expecting to have after last years I/O, but nevertheless the thing is now real. The biggest surprise was that it also supports iOS devices! :O

So I had already integrated OpenKit for Jewels 2, which was great, but there were some nice bonuses with Google's solution. After thinking about it for some days and trying the code, I made the decision to switch to GPG from OpenKit. As GPG also supports iOS, there was not much point of keeping the both services implemented.

Naturally this has caused a delay in Jewels 2 development, since I had to rewrite the leaderboard and cloud save (*) stuff, but it only took about three days of work, so not that bad.

However, Google requires a game using the services to have at least 5 achievements. As I wrote earlier (below, actually), my plan was to add the achievements in a later update, but now I need to have them in by the first release. Oh well, shouldn't take too long. Still a few days of May left, let's see if I can get the Android version out before June (probably not, though).

*) Doing cloud save is actually pretty difficult when you cannot merge the datasets when there is a conflict.. The end result is that the game should not be played simultaneously on several devices when syncing on the same account, because only the latest sync is kept. I'm still testing various approaches of manual, semi-automatic and automatic sync. If I could merge the datasets, using automatic sync would be a no-brainer, but alas, it's more difficult in my case.

Long time no write; it's time to unleash a quick post for your reading pleasure! I have some exciting news to share with you — and no, it's not the release date, sadly that one is still a mystery even to myself.

However, I can give you the Ultimate Deadline(TM) for Jewels 2. This has been known to my Twitter followers for some time now: I will do my best to release the game before July 2013, hopefully sooner than later! What's so special about July, then, I hear you ask? Oh, you didn't ask? Well I was sure I… *ahem* Anyway, in July my wife and I are expecting our second baby, a little sibling to our now 3 year old daughter. So that's the Ultimate Deadline(TM).

Now, if I had to guesstimate the release date, I might be inclined to say May instead of June, but too early to tell for certain..

But wait! There is more. Remember I talked about the social gaming components earlier? Continuing on that note, I am hereby announcing that Jewels 2 will support cross-platform leaderboards (and hopefully cloud sync of game data) through Google Play Games (see the update above) ! This means that players can compete with each other in the numerous game modes, no matter whether they're playing on an iPhone or an Android device.

And even better, I'm hoping to add in cloud synchronization of the game data, meaning all your player profiles (if you have more than one), statistics and saved games in Jewels 2 are accessible from any other device you might have. On iDevices Jewels 2 naturally also supports Game Center leaderboards. Of course, should Google unveil some magical gaming component at this years Google I/O, I'd be delighted to support it as well.

As for achievements: currently the plan is to first release Jewels 2, and then in a later update add some achievements for the players to reach for. What's on my TODO list before the release, then? Well I've still got a couple of background scenes to draw/set up, the cloud sync thing, some minor code thingies and some polish. And testing, of course. So not too much work, actually, which is nice.

What else… Oh, you might have noticed the screenshot on the right? (That also appeared on my Twitter before; keep an eye out for more, especially on #ScreenshotSaturdays!

) It's from the COLLECT-mode, where you need to collect an increasing amount of each jewel per level.

The first look at Jewels 2

Here are the very first screenshots from Jewels 2 (running on Galaxy Nexus here)! The background graphics are still temporary but otherwise we're looking at the actual game. As you can see, I have not changed the jewel graphics (except for the red one, which was an ugly duplicate of the green gem) much, only minor tweaks here and there. Click for the full image. 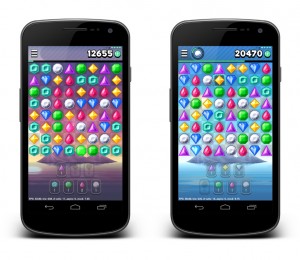 That is all for now, I will share more pictures when I get at least one background scene constructed.