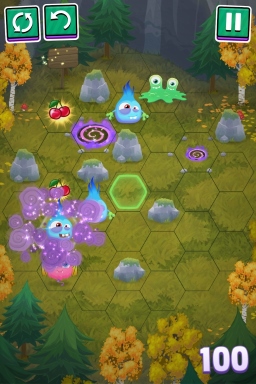 Well look at that, I made a second post in the series of Oddhop status updates, just like I sort-of-promised!

For comparison, check out the earlier post here. But first some exciting news: currently Oddhop is about to start private Alpha-testing very soon! It is a small step for humanity, but a big one for us: before only a handful of folks have tried or even seen the game.

In addition to Alpha-testing, I set up a page for the game (Oddhop). Check it out for more information! I've also been preparing the Oddhop Press Kit, which will be posted soon. UPDATE: The Alpha-testing has begun, and the Press Kit is now available!

As customary, here's a brand new screenshot and then we'll dive right in just what the hell is going on with the game as of late!

Again, in no particular order, here are the things still need to be done. As you can see, the list is much shorter than it was last time! Personally I'm happy with the progress made in the last month, I've put in as much hours as I possibly could.

Here's a reminder what was in my TODO list before, and now is looong gone!

That's it for the February update! See you possibly in March!