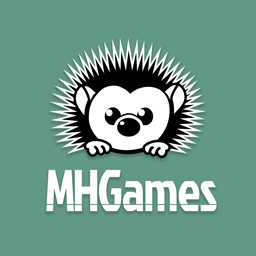 Phew! I barely made this third monthly update in time! I don't have a new screenshot to show this time, but wanted to show the new MHGames logo I made a while back. The old one was quite badly dated and needed some refreshment, I made something simpler and cleaner looking.

We've been expanding our closed Alpha-group quite a lot on both Android and iOS (if you want to try the game, drop me a note!). The initial feedback has been great, even though not many people have finished the game, so we haven't really received any definitive data on the difficulty level of the game. If you're part of the testing group, reading this and feeling a stab in your heart, you need to play more!

Speaking of difficulty level: we developed a gut feeling that the Water-levels were actually easier than the Swamp-levels, so we've switched things around: Water-level pack is now II, and the Swamp is III. Not that they need to be exactly in difficulty order (as that varies per person), but I think they're better this way.

Again, in no particular order, here are the things still need to be done. I added couple of things that I had forgotton earlier.

Not going to do a full list on things I have done since the last update, but here is a brief summary. I've done the social gaming integrations (meaning achievements, leaderboards on both platforms), statistics are now gathered, did the above mentioned eye movements for polish, and our sole In-App-Purchase (ad-removal on Android) works. I've also cleaned up and optimized the code, getting rid of the old and nasty prototype parts. So yay me! Solid progress, even though I have been playing quite a bit of Earth Defense Force 4.1!

See you in a month, maybe?