Little background on today's topic: When I first heard of the Google Android-platform some years back, I thought it was interesting but never actually expected to see proper devices (i.e. mobile phones) coming to reality. Now that there is several Android phones from a few manufacturers, I've been eyeing out the devices with great interest for a while now, I guess closer to a year actually. Waiting for them to arrive here in Finland. And, as you might have guessed already, they have arrived.

So, I got myself a brand new HTC Hero! Obviously, the main interest for me was the prospect of developing software (ok, games) for the Android-platform. Also, it's darn good phone as well, who would have thought of it?

My previous phone was a few years old Nokia, just a basic model with no bells and/or whistles — so this is all new to me. 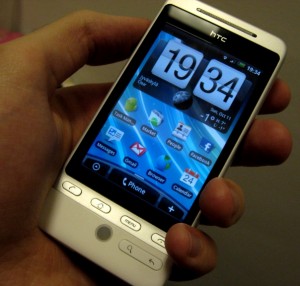 Why not iPhone, then? Well, there are several reasons I went with Android:

What this all means, is that I will be making some Android-games in the future. To get myself familiar with the new platform, I chose to port Jewels over to Android. It's still in very early stages, as I really started working on it only yesterday. It remains to be seen if the standard software accelerated 2d Canvas API is fast enough for my purposes (should be for Jewels), or if I have to go over the OpenGL ES route. If / when I get it completed, I plan on making it available through the Android Market, for free. Actually, at this time it is not even possible to submit paid apps to the Market from Finland, nor it is possible to purchase apps. Hopefully Finland gets the full Market support in the coming months.

After Jewels, anybody up for Steroids³?